So, in less than 48 hours, we will board a plane that would bring us to Manila for TATLO.

The word “three” has great significance to the SYC Ensemble Singers. In December 2006, we held a concert, “THREE”. Inspired by the International day of choral singing, Three Choirs, the Ateneo Chamber Singers from the Philippines, Gaia Philharmonic Choir from Japan and us, led by our conductors (coincidentally born in the same year), sang to a wonderful audience at the Esplanade Concert Hall.

In January 2009, we met again in Tokyo, Japan, for THREE Vol. 2. Now, we will meet in Manila in our latest incarnation, TATLO. 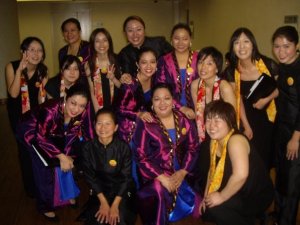 Some of Ateneo, some of Gaia and some of SYC after our concert. Tokyo Metropolitan Art Space. Jan 2009.

THREE is more than a random occurrence of singers being at the same place at the same time. It is friendships and musical relationships formed; and each time we meet, it is as though the two years have never passed – we are never short of words to say, and we sing together like its unnatural not to.

At the same time, we are fundamentally different, bringing each other’s culture, sentiments and character through our music to one other and the audiences we perform to.

In each of these concerts, we present three triple choir works, all written specially for (the three of) us, by composers from our own country. Our offering to THREE has been “Aeterna Lux, divinitas”, a three parter composed by a young, talented, Singaporean composer, Americ Goh.

“For the “Three” Festival, first held at home in 2006, Jen (our conductor, Jennifer Tham) gave me the opportunity of writing a work for the three choirs. Having a deep connection to the text Aeterna Lux, divinitas, I set each movement to each strophe. The second movement Summum Parentem credimus was composed in 2008. Compositional “energy” and intuition are sustained and continued from the first movement to the second, and to the third, O veritas, which was completed in 2010.”

The text of the three movements correspond to the first three verses of the 18th century hymn it’s based on.

While the text is old, Americ has injected a modern touch to it. Sparse beginnings and funky intervals move onto denser textures and a (sonic) blooming light (well, you can almost actually SEE the light and hope materializing in front of your eyes).

listen to Aeterna lux, divinitas – performed 4 Dec 2006, Esplanade Concert Hall, Singapore.
“Each movement portrays different sides of me and reflects my influences at each juncture.

In fact, Americ was part of our choir before he left for Austria to further his studies, and had participated in the very first THREE.  To us who know him, the works tell us more about him through the years, and what his likes/influences/inspirations are.

“These movements contain reminiscence of history through the use of direct/derivative quotations from the great masters.”

Listen carefully and you might hear a Bach chorale-ish bit here and some Strauss there.

Unlike many composers who dictate every single detail and performance direction in their scores, Americ has chosen to give the performers, or rather, their conductors, free reign.

“Each movement writes itself and has a life of its own, I was only there to guide in the process. It’s important that conductors/performers not perform rigidly to the scores’ indications, but express their own interpretation along with my guidelines. Jen has artistically accomplished this.”

On 8 January 2011, the three choirs will perform Aeterna lux, divinitas – III. O Veritas. As we sing of hope and faith with our friends from Ateneo and Gaia, we hope that our interpretation of the music will bring light to our audience in our world of uncertainty; and with TATLO, a wonderful start to the new year filled with great music, friendships and simple joys that we have been blessed with.

p/s: Thank you, Americ for your time and words, and of course, the wonderful gift of your music. 🙂